Businesses and Consumers Are Responding to California Drought (by Janae Mata)

By Linchi Kwok March 04, 2016
Living in California in this day and age, we all know that California is in a huge drought. California features many attractions, such as water parks and many nice unique restaurants that rely heavily on water usage.  However, they do not want to shut down and lose visitors just because of the drought.


Hurricane Harbor is still open in the summer when the weather is warmer. Disneyland rides that use water such as Splash Mountain and It’s a Small World are still in use all year around. "The drought is affecting California's tourist attractions in very different ways, but most tourists are unlikely to be affected since businesses have merged water conservation practices with their overall operations," said Ryan Becker, Vice President of Communications at Visit California.

One way it is affecting tourists in California is at restaurants. At many dining establishments, you now have to ask for water; where back before the drought, the server would bring everyone water without prompting. The old way of doing things caused a lot of waste. For example, before the drought, when the server would give my table water, not everyone would drink it and the water would go to waste. I think the new way the restaurants are now giving water out will help save many gallons of water. 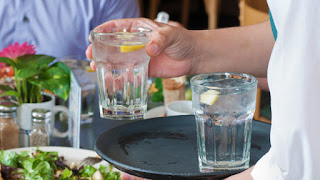 Most attractions and tourist locations in California are becoming eco friendly. One example is in hotels. Some hotel locations request guests take faster showers so they won’t waste the water. Also in some restaurants, they use paper plates so the kitchen would not have to wash dishes and restrict their water usage. If the restaurant is not using paper plates, they often raise prices of the food so they can still be in service.

I would travel miles away to go to a restaurant that is green friendly because I would love to help support the mother nature. Also, in Disneyland they have a practice where they recycle all the water for the entire park to use. Once a week, my brother and I go to LA and try out a new unique place to eat. It is always a plus when I see that they’re friendly to the environment.

If many of the restaurants and attractions in California would advertise more about how they help mother earth, they would get more customers. They could reach out to customers on social media to let them know what they are doing to benefit the environment. For example, if there was an app made for restaurants that had the locations on and the app would only have green friendly attractions on it, to get more customers.

Furthermore, if Californians really cared about their home they would do so much to help and not depend on others to do so. According to Cox "California has an estimated 60,000 full-service restaurants," said Cox, "if each of these restaurants switched to compressed air for precleaning plates and could save even just 250 gallons per day, that would equal over 5 billion gallons of water per year."

Would people actually use an app if it was invented to help out the earth? Are eco friendly restaurants and attractions the new hip thing? If celebrities advertise for these kind of companies would there be a bigger target?

Janae Mata is currently a third year transfer student at The Collins College of Hospitality Management of Cal Poly Pomona. She grew up in Bakersfield, CA where she attended Bakersfield College prior to transferring to Cal Poly.  Janae’s lifelong dream of working for the Disney company has been fulfilled as she recently accepted an offer to participate in the much-sought-after Disney College Program this coming spring.  Her dazzling personality and strong work ethic are sure to make a lasting impact during her time at the Disneyland resort. In her free time, Janae enjoys capturing memories for her loved ones and those around her through the art of photography. She also has high aspirations for her career following her graduation in Spring of 2017. She hopes to one day host her own radio show or work for one of her idols, Ellen DeGeneres. She is excited to see what the future brings!