How to shut down bad online reviews

By Linchi Kwok April 03, 2017
What can managers do to shut down bad online reviews? Here is a real example: 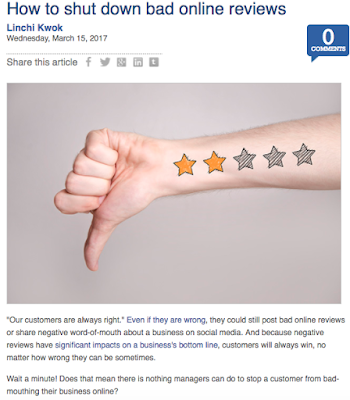 It started at the Broadway Oyster Bar in St. Louis this February when Mary S., a Yelper, left the business with a one-star rating and a description of the negative experience she received in the restaurant. As a reference, the restaurant is now being monitored by Yelp for any content related to media reports, meaning some reviews have been or would be removed from the business's page on Yelp, but the restaurant has an overall 4.4 star rating from more than 900 Yelpers in March.
Mary went there for a birthday dinner. She claimed that she had a reservation for a party of nine people, but the party waited for two hours before they were finally seated. To make it even worse, because there were three additional people joining the party and the manager was unwilling to work with them, they would have to wait for longer to be seated together or be split up.
She then took the group of 12 people with her to a nearby restaurant, where she and her guests could enjoy a "FABULOUS dinner with EXCEPTIONAL CUSTOMER SERVICE"(in Mary's own words).
Then, the owner of the restaurant exercised his rights of responding to Mary's review on Yelp — for every comment left by a customer, managers are usually allowed to post one response. As a matter of fact, managers are highly recommended to post managerial responses to online reviews because their responses have significant positive impacts on the helpfulness of reviews as well as their business's financial performance.
The owner of the Broadway Oyster Bar pointed out the "real" facts on Yelp, including:
Later, Mary posted another review to respond to the manager's "real" facts:
Now that you have read the reviews from Mary and the manager's response, which side will you take? Who presented the real facts?
More importantly, do you see how critical it is for the owner to respond to Mary's review? In a case like this, managerial responses can provide additional information from the business's perspective, allowing other customers to make an informed purchasing decision with an evaluation of both sides of the story.
In the end, I would like to make the following recommendations for managers who are ready to take an active role in responding to online reviews:
What else should a manager do in responding to online reviews? What are your suggestions?
* Another version of this post was published in MultiBrief.com.