DMO services to hotels: How valuable are they?

By Linchi Kwok January 31, 2018
Destination marketing organizations (DMOs) are responsible for the management and marketing of a tourist destination. As a means to promote a destination, DMOs provide a variety of services to the tourists as well as other hospitality and tourism businesses in the area.
While DMOs usually operate in different geographical and administrative levels — namely in the national, regional/provincial/state or local level — current research suggests that DMOs generally provide the following services:
Yet relatively little research reported the specific services provided by DMOs to hotels. Moreover, as suggested in the stakeholder theory, hoteliers and DMO operators — who represent two key stakeholders of a tourist market — might perceive different values regarding the same services available.
I worked with Tiziana Oggionni, a recent graduate of the master's program in the Collins College of Hospitality Management at Cal Poly Pomona, on a qualitative study. The results were published earlier this month in the Journal of Destination Marketing & Management. 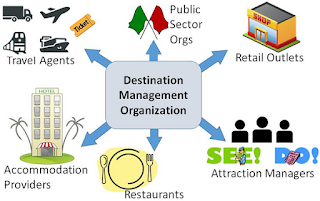 We aimed to answer the following research questions:

The data and analysis

We adopted a qualitative approach, where the primary data were collected with two-phase, semistructured interviews with 14 industry practitioners. The first phase began with in-depth interviews with five DMO representatives working in a national, state/regional or local level about the DMO services provided to hotels.
We used the interview protocol developed from a review of literature, of which the results were used to advance an improved protocol for the next phase of the study.
Using the improved protocol during the second phase, we further interviewed nine hotel informants who managed properties in a wide range of market segments (from economy to luxury hotels). The focus of this phase was to assess hoteliers' evaluations of the DMO services received, as well as their suggestions on the areas that may need improvement.
In terms of data analysis, we firstly analyzed each data set collected in two different phases separately, both with content analysis methods. Afterwards, we further triangulated the results from two data sets before reporting the final findings.

Our triangulation analysis revealed some intriguing insights. We were able to identify at least seven (instead of five) services provided by DMOs for all stakeholders of a tourist destination (not specifically to hotels). Yet there were also some discrepancies regarding the perceived values on those services among DMOs and hotels.
For example:

Theoretically, our in-depth analysis revealed two emerging services that were not often discussed in previously literature: networking opportunities and cost sharing. The triangulation analysis also helped us advance the two-dimensional classification of DMO services by DMOs' and hotels' perceptions.
Practically, we made the following recommendations to DMOs:
Do you use any services provided by DMOs? How do you value those services? Additionally, what new services do you want see from DMOs?
Note: This discussion is also available on MultiBriefs.com and HospitalityNet.com.