Are Customers Also Responsible for Their Dining Experience?

By Linchi Kwok August 07, 2014
I recently read an interesting experiment from a famous restaurant in #NYC, where the owners compared customers' behavior of today and that of 10 years ago.  I wrote an article about it on MultiBriefs. 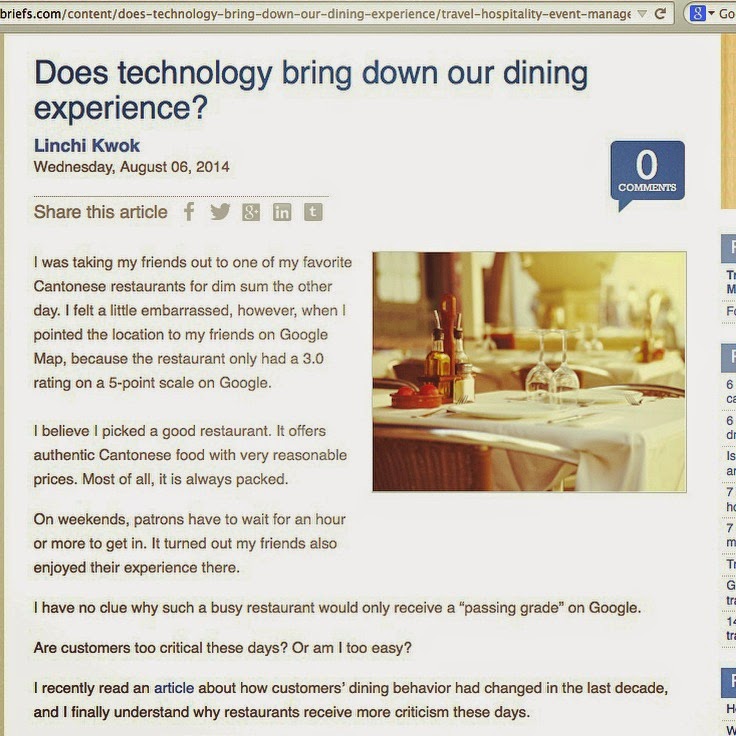 Here is what was reported by the restaurant (and what I included in the article):

They were seated with a menu.  Three out of 45 requested for a different seat.

Customers spent about 8 minutes on the menu before closing it, indicating that they were ready to order.

Appetizers were served in about 6 minutes (except for complex items).

Two out of 45 customers sent items back.

Checks were delivered when customers finished their meals.

On average, it took 1 hour and 5 minutes from start to finish.

They were seated with a menu.  Eighteen out of 45 requested for a different seat.

Instead of opening the menu, they took their phones out. Some were taking pictures; others were just playing with their phones.

Seven out of 45 had servers come over immediately.

They showed something on their phone to the server and took about 5 minutes of the server’s time.  Later, the servers explained to the management team that the customers needed help with Wi-Fi connections for their phones.

When servers approached customers for orders, most had not even opened the menu and asked the servers to wait.

Customers finally opened the menu, with their hands holding their phones on top of the menu. They were still playing with their phone.

Servers came back to check with the customers. Customers asked for additional time.

Customers were finally ready to order, with an average wait time of 21 minutes.

Food began arriving in about 6 minutes (except for complex items).

Twenty-six out of 45 customers spent about 3 minutes taking pictures of the food.

Fourteen out of 45 customers spent an additional 4 minutes taking pictures of themselves or one another with the food in front of them.

Nine out of 45 customers sent food back to reheat.

Twenty-seven out of 45 customers asked servers to take a group picture for them.  On average, it took about 5 minutes of theirs and the server’s time until the customers were satisfied with the group picture.

On average, it took 1 hour and 55 minutes from start to finish.