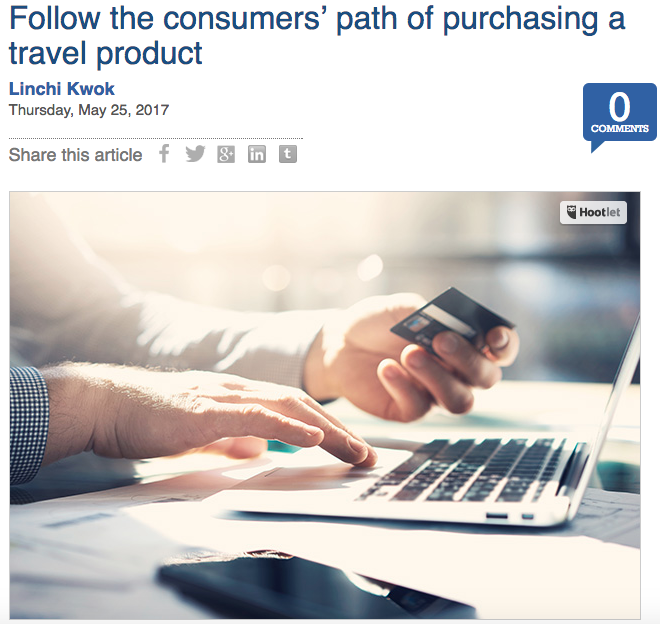 Hotels have been working hard to win more travelers to "book direct" on their companies' websites, but are consumers listening?
In fact, hotels are not alone. All service providers in the hospitality and tourism industry want their customers to make purchases directly on their websites, but consumers want to search and compare various options before making a decision.
So, to convince customers to purchase directly on the service providers' websites, companies must understand where their customers "hang out" in the cyber marketplace before they make the purchasing decision, as well as where they end up buying their services.
The white paper "Understanding the Travel Consumer's Path to Purchase" by Eye for Travel provides some business intelligence in that regard. The report combined a large panel consumer data of online transactions and surveys into the analysis, revealing the following results:

The places where customers purchase a travel product

With an analysis of about 200,000 bookings in the U.K. and the U.S., online travel agents (OTAs) such as Expedia and Priceline are winning big in the competition.
In the U.S. market, 42 percent of purchases came from OTAs, leaving 39 percent for airline brands and 19 percent for hotel brands. In the U.K. market, 73 percent of purchases came from OTAs, 23 percent from airline brands and only 4 percent from hotel brands.

The devices used for buying the travel product

The devices used for browsing before making a purchase

The websites visited before making a purchase

Where do smartphones fit in?

It seems smartphones played a more significant role in both the researching and purchasing processes for consumers in less developed countries than those in developed countries. For example, 66 percent of Indians accessed travel websites with mobile devices, but only 34 percent of them used desktops. In the U.S., such percentages changed to 54 percent for using mobile devices and 46 percent for using desktops.
Not surprisingly, a large percentage of consumers aged between 18 and 34 owned at least one smartphone. For example, 85 percent of Chinese aged between 18 and 34 owned at least one smartphone, but only 43 percent of Chinese aged 35 or above used smartphones.
Another good example came from the U.K. consumers aged between 18 and 35. When asked if they researched and/or booked air travel on a smartphone in the past, over 90 percent of participants said so. Specifically,

What are the next big things?

The top two "game-changing" factors in the industry were mentioned:
The top three areas for future opportunities include:
Other possibilities or opportunities may include:
Now, do you have a better idea of where travel or hospitality companies can reach their target customers in the cyber marketplace? Tell us what else you want to know. Your voice could inspire the next big research project.
This post was also published on MultiBriefs Exclusive, the leading source for targeted, industry-specific news briefs.