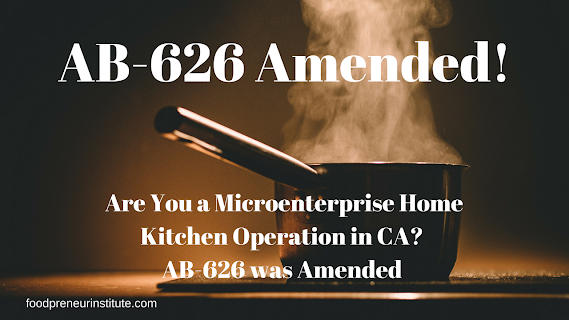 On September 18th, 2018, California Governor Jerry Brown signed into law Assembly Bill (AB) 626, which became effective in January of 2019. This law formally allowed cities and counties to legalize microenterprise home kitchen operations across the state of California. As of January 2020, only Riverside county had adopted AB 626, but the pressure is mounting for more counties, specifically Los Angeles and San Bernardino, to adopt it as well.

CA Assembly Bill 626 passed with bipartisan support and allowed chefs and home cooks to start small operations out of their homes known as a microenterprise home kitchen operation, or MEHKO. These operations can choose delivery, take-out, or dine-in options. Cooks wanting to start a home kitchen must go through a permitting process, pass health inspections, and can only generate up to $50,000 in gross sales annually. Though gross sales are capped annually, being able to earn up to $50,000 annually with a roughly $1,000 investment is a pretty good return for someone who is trying to start in the industry and gain a customer base, or for someone who recently lost their job due to COVID-19 and is looking for something to do until they can find another job. This bill, however, has not been adopted across the whole state of California as each country must sign this bill into law for their individual county.

MEHKO’s in the Face of COVID-19

When COVID-19 first started in March, many restaurants were forced to close their indoor dining and do take out only. Now, seven months later, some restaurants have had to close their doors, leaving an estimated 8 million employees laid off nation-wide. AB 626 is a way for those employees to start their own place at a low cost until they could find more permanent work again, or be able to prove their concept to start their own restaurant one day. However, major counties like Los Angeles and San Bernardino have yet to adopt the law, causing many home cooks to try and lobby for them to adopt the law.

A new California based company called Foodnome assists home cooks in lobbying for the bill to be passed in their county and then helps them set up their home kitchen. For $1,000, Foodnome walks a home cook through the permitting process, and then allows them access to their platform, which allows customers to order food to-go, for delivery, or dine-in at their home. They help market and grow businesses, and have become especially popular during COVID-19.

With MEHKO’s becoming more popular, counties like Los Angeles and San Bernardino could be forced to follow suit. New and upcoming chefs could turn to this option to get their name out there and test new concepts, signaling a new shift in the restaurant industry.

Will MEHKO’s be adopted throughout all of California? Would you eat from a MEHKO? How will this change the restaurant industry, if adopted more widely? 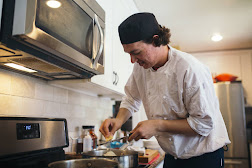 Jacob is a fourth-year Hospitality Management major at the Collins College at Cal Poly Pomona. He is involved with the Kellogg Honors College and ETA Sigma Delta, the international hospitality honor society. He currently works at Flying Rice as a chef and is the executive director of Plants 4 the People. He one day hopes to open his own restaurant.

By Linchi Kwok October 07, 2020
Amazon recently introduced a  new biometric payment device , Amazon One, in two of its Go stores in Seattle. Shoppers can now enter and pay at cashier-free  Amazon Go  stores by scanning their palms. The company opened its first Amazon Go store in Seattle to the public in  January 2018 . Currently, Amazon operates  21 Go stores  in Chicago, New York, San Francisco, and Seattle, with five temporarily closed. Unlike a typical grocery store, Amazon Go offers grab-and-go, ready-to-eat snacks, breakfast, and lunch options for shoppers. Shopping at Amazon Go can be as easy as walking in and out of the store. After consumers download the Amazon Go app and link the account with a form of payment, they can: Walk into the store by scanning the Amazon Go app. Grab the items wanted. Walk out of the store. Be charged through the Amazon Go app. How Amazon One works Amazon One  works similarly to the Amazon Go app. To  sign up , shoppers will need a credit card, a mobile number, and of course, their
11 comments
Read more