From the streets and into your stomach: How international street food is quickly increasing in popularity (By Vanessa Gorgonia)

By Unknown December 18, 2018
Are you thinking about the next food trend you should try? Grab all of your foodie friends and find some street food! More and more people are liking the idea of the buying food that is comforting, unique, and good enough to show off to their peers on social media.

According to the Forbes website, some of the trends that shape our food decisions include whether the food option is tactical, reflects mindfulness, and how well the food is advertised. Street food is the answer to all of our needs. From tacos and barbeque skewers to sushi burritos and churro sundaes, this trend is making a big statement and it is here to stay. 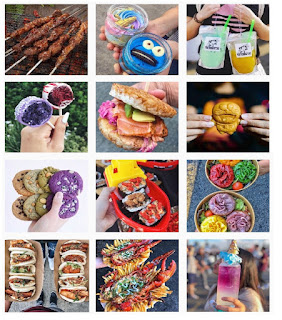 Cooks are constantly experimenting with various international dishes and flavors to create their own twist on classic items. For example, a ramen chef named Keizo Shimamoto created the idea of a ramen burger, a burger with Asian flavors and ingredients using crispy ramen noodles instead of buns. This concept became a very popular idea that many people wanted to try back in 2013. Some people enjoy street foods because they are generally made to order, meaning fresher, and most likely local ingredients. In addition, innovative ideas are being incorporated into original street food recipes to publicize the transformed modern versions. Pineapple fried rice served inside half of a pineapple with Cajun shrimp is a great example of a mix of flavors across the globe while containing an eye-catching appeal. Simple creative adjustments can be made to street food dishes like adding food coloring to make it rainbow themed. Drinks, such as aguas frescas, milk teas, and lemonades, are also now being sold in unique bottle-ware, like branded mason jars and light bulb shaped glass, with light-up ice cubes to stand out from their competition.
The marketing tactics for success 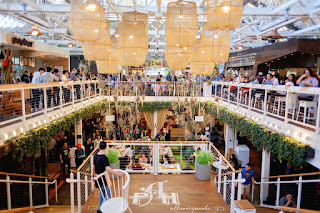 Multiple interpretations of street foods have been expanding throughout the years to attract a new type of target market in the food industry. The growing use of social media has made “word of mouth” one of the cheapest and most effective marketing tactics for any food operation in today’s society. With a simple picture or video of food and the name of the company, it can quickly go viral and be shared amongst hundreds of thousands of people. Some companies are committed to posting their own pictures and videos of their food on a daily basis to gain attention. Inexpensive food options that are unknown tend to become successful after being shared online. Depending on the type of social media app, companies can reach out not only to Gen Z but also Millennials and Baby Boomers to capture their interests and create a big consumer market.

An article written by Emma Weinbren on The Grocer website discusses a study conducting percentages what food-lovers thought of street food. Over 2,080 consumers participated in a poll where they, “described street food as exciting (80%), authentic (78%), and high quality (72%).” The Grocer also forecasts that street foods will increase by about 9% which may become true; with this amount of high popularity, both casual and fine dining restaurants are quickly adding street food concepts into their menus. Besides food trucks, food halls, which is similar to food courts but tends to focus on food rather than merchandising stores, have become one of the main advertisers for street food. California has numerous locations for foodies to go and try. The Anaheim Packing District in Orange County, Anaheim, CA or the new food hall in the Inland Empire, Chino Hills, CA called Cravings by 99 Ranch are increasing in popularity due to the unique street food options being sold. Food events such as the Asian inspired, 626 Night Market in Arcadia, CA is also a becoming a very well-known event to find multiple options of street food. Food Halls and food events bring food-loving people alike together to try new items such as street foods.

10 Popular cities to find street food (based on CNN Travel) include:
What dishes mentioned interested you the most? Why do you think street foods are becoming more popular rather than fine-dining? How will the increase of small businesses selling street foods affect bigger companies? 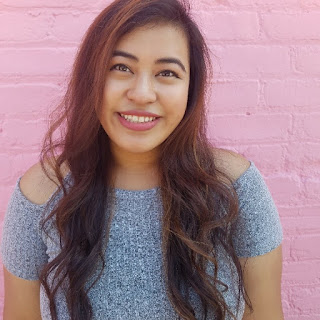 Vanessa Gorgonia is currently a student at Collins College of Cal Poly Pomona pursuing a bachelor’s degree majoring in Hospitality Management and minoring in Human Resources. She previously received an Associates Degree in Psychology and Hospitality at Mount San Antonio Community College where she was also the president of the college’s Hospitality Management Club between 2017-2018. Vanessa is an alumnus of the Prostart program where she competed in the Prostart Cup and placed in 3rd (in 2013) and 2nd (in 2014) place for Restaurant Management. She is currently in a Lead Management role for restaurants at the Disneyland Hotel in Anaheim and hopes to advance to a Manager position in the future. Vanessa enjoys creating magical and memorable moments because she is passionate about helping others and making people smile.

By Linchi Kwok October 22, 2019
United Airlines just revealed massive changes to its MileagePlus Program. How much a traveler spends on the tickets is the only thing that matters in the airline’s new frequent flyer program.

Not long ago, United quietly switched from a distance-based reward program to a fare-based frequent flyer program. Since 2015, people earn mileages based on how much they spend on the air tickets instead of how far they fly.

For example, I typically earn about 4,000 reward miles for a round-trip ticket between Los Angeles and Asia, even though the distance of the trip usually ranges from 10,000 to 12,000 miles. Nevertheless, the distance I fly still matters because it will be counted towards the “qualified miles” for elite status.

Now, the airline wants to take a big step further to (only) reward those top-spending travelers as their elite customers.

By Linchi Kwok November 19, 2019
I was in New York City (NYC) over the Veterans Day weekend for the HX: The Hotel Experience 2019, one of the most important trade shows in the lodging industry. Similar to last year’s trade show, the HX 2019 also entailed four components, including HX: The Marketplace, HX: The Conference, Boutique Design New York, and the STR (Smith Travel Research) Student Market Study Competition.

STR is the leading data analytics provider for the lodging industry. Since its debut in 2015, the STR Student Market Study Competition (the STR Competition hereafter) has received significant attention from the hospitality programs around the world.

This year, over 20 students from the Collins College of Hospitality Management at Cal Poly Pomona traveled to NYC for HX 2019. Moreover, six of them also participated in the STR Competition for the first time.

In the end, the Cal Poly Pomona team won the 2nd Prize among the 25 competing colleges and universities. The other winning teams include Michigan State …
Post a Comment
Read more

Want a job at McDonald’s? Now, it is as easy as talking to Alexa