Are supermarkets becoming a new product-category competitor for restaurants? 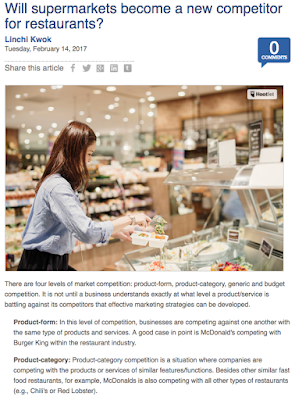 Running a restaurant business is becoming more difficult these days. Restaurants face many challenges, including the soaring minimum wages and lower store traffic.

On top of that, the food cost has remained relative low over time, widening the price gap for the food purchased in a supermarket and a restaurant. That is a major reason why I see supermarkets are becoming a product-category competitor for restaurants.

In my recent discussion on Multibriefs.com, I first described the differences among four levels of competitions --- product-form, product-category, generic, and budget level competition. Traditionally, supermarkets are not considered a product-category competitor for restaurants, but...

More supermarkets are offering restaurant service, selling food with a much lower price. I have seen people eating and drinking in some high-end supermarkets, such as Whole Foods as if they were eating in a casual dining restaurant.

Grab-n-go is getting better in supermarkets. So are those ready-to-cook packages. Whole Foods recently introduced the butchering service for fresh produce.

No tipping becomes an emerging trend in restaurants. So, the differences between a restaurant and a supermarket are not that clear anymore.

So, do you also see supermarkets are becoming a big threat to restaurants? What shall restaurants do in responding to the threat coming from supermarkets?