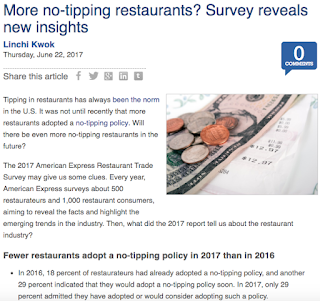 Tipping in restaurants has always been the norm in the U.S. It was not until recently that more restaurants adopted a no-tipping policy. Will there be even more no-tipping restaurants in the future?
The 2017 American Express Restaurant Trade Survey may give us some clues. Every year, American Express surveys about 500 restaurateurs and 1,000 restaurant consumers, aiming to reveal the facts and highlight the emerging trends in the industry. Then, what did the 2017 report tell us about the restaurant industry?

The tipping behaviors among consumers

Besides this no-tipping trend, the 2017 report also reveals some interesting findings that complement our previous discussions about restaurant operations. For example:

Managers are striving to promote good reviews about their business while minimizing the negative impact of the bad reviews.
In particular, businesses are highly recommended to adopt different strategies when responding to online reviews according to their product types. The 2017 report also highlights the following in regards to online reviews and social media:

Outlook and the challenges facing the restaurant industry

Despite of the increasing concern of the restaurant business, the restaurateurs being surveyed by American Experience felt very optimistic about the business’ outlook.
Once again, I can see technology is really a double-edged sword. While it can help increase productivity, the advance of technology also eliminates more job opportunities. For customers, technology can help speed up the service, but at the same time, it might also have brought down consumers’ dining experience.
What do you think of technology? Is it good for bad for people working in the restaurant industry? Besides technology, what other emerging trends do you see from the 2017 report?

This discussion is written based on a courtesy copy of the "2017 American Experience Restaurant Trade Survey Fact Sheet."
This post was also published on Multibriefs.com.