The Evolution of Sales (by Nathaniel Taylor)

By Unknown May 28, 2018
Though the dinosaurs went extinct millions of years ago, traces of their existence can be found scattered throughout the Earth. In the case of an older salesperson, it is a little different. The “fossils” of the salesperson cannot be found no matter where you look. Their existence is not apparent in today’s ever-changing world. Technology is their meteor and it buried them deep. Now, from the ashes, came a new way to market and sell. It either adapts or dies.

Only decades ago, the salesperson reined supreme. We can still picture a prototypical salesperson. The preconceived notion was that they were extroverts. With fewer communication channels, a salesperson would often rely on their wits, tenacity, humor, and strong verbal skills to excel at their job. Whether it was making presentation calls, going door-to-door, or setting up face-to-face meetings, things were more or less in their control. If they could find a way to relate to a prospective buyer, crack a good joke at the right moment, or make a pitch that could not be refused, chances are they would have the buyer hooked. Others would have to rely on intimidation or scare-tactics to produce the same outcome. No matter what method they try, like baseball, they would fail more than they succeed. Three hits out of ten in the majors, and that is considered a good hitter. In the case of making sales, a salesperson must make many attempts before s/he gets one hit. Nevertheless, this all seems like a lot of efforts. Something the introverts would probably not be interested in doing.

Times have changed. Everyone is now connected, and collectively smarter. The emergence of emails, social media, spreadsheets, the ability to store data, virtual meetings, and other features, have paved the way for a new way to buy and sell. People are not as easily swayed as they used to be.

Technology has also switched the balance of power to favor the buyers. With neigh unlimited information at the palm of people's hands and a plethora of options, sellers are now forced to make changes. People no longer want to be sold on something. Instead, they wish to be guided. They want to feel assured. That is something a door-to-door salesman cannot do anymore.

We are now seeing the introverts, not the extroverts, succeed in sales. No longer do the salespersons have to exert themselves, traveling like a madman just to find a sale or two. They can now conduct all of their research online, market and converse online, and even make sales online. They can also hone in and focus their efforts on the clients they believe are the best for them. There is no more guessing. Not to say that venturing off and visiting these clients is a bad idea. It still happens. It just is not as necessary anymore. Where the older, extroverted salespersons' job was physically daunting, the new, introverted salespersons' job is mentally daunting. These big changes in recent years have made it difficult for the older salespersons to adapt. Sadly, if they cannot, their jobs will likely fall by the wayside as a new generation steps up and fills in.

It seems the more advanced our technology gets, the more we lose touch with our own humanity. In a world where the face-to-face conversation has greatly diminished, email or text messaging is the easy and obvious alternative. What that option is lacking, however, is a personal touch. An email cannot convey someone’s tone of voice. People cannot see others' facial expressions or interpret others' body language with a face-to-face interaction. Eventually, people will get sick of listening to an automated voice system. People crave human interactions. It is in our DNA.

So may I ask: Is there a world in which both the old and the new coexist? A recent study has found that it was the salespersons who went out of their way to place a call that, ultimately, made the sale. It shows that they care. With so few people willing to pick up the phone instead of sending a quick email, it will be the person calling that separates themselves from the rest of the pack. It will be interesting to see how far this will go until people say “that’s enough.”

In a perfect scenario, the old and new salespeople work together, side-by-side, feeding off of each other. The truth is, though, there are just too many people to call or visit. We are now comfortable with brands, not people. I hope that along with our journey we never forget who we are or where we came from. Integrating the old and new is, in my opinion, essential for success in this ever-changing world. Being one-dimensional is not an option. Wherever sales are headed is anyone’s guess. What we can be sure of is that today’s salesperson will, one day, become extinct. A new method and way to sell will again emerge.

In your opinion, what role do the introverts and extroverts play in sales and marketing? Can they co-exist in the field? 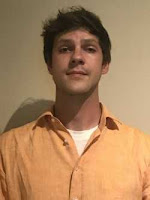 Nathaniel Taylor is a native of Berlin, Massachusetts. Just having moved to SoCal a little over two years ago, he is now in his last quarter of school before obtaining the B.S. Degree in Hospitality Management (with an emphasis in lodging) at Cal Poly Pomona. Upon finishing his studies, he hopes to venture off and start his career in the lodging industry. Regardless of where he ends up, he wishes to learn every aspect of the industry from the bottom up. Eventually, he aspires to manage a resort property. He is a wonderful conversationalist and has love to make people smile - that's why he got into the field in the first place!