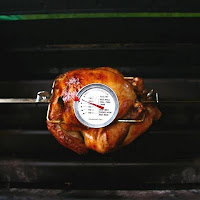 This new regulation is introduced for consumers’ safety. In addition, cooking temperatures have a great impact on the quality of food being served, the cooking time, and the means of how the meats are served. It seems to me, however, this new regulation only made some mild amendments and should have little impacts on food preparations. What do you think? How much will this new regulation affect a restaurant’s day-to-day operations?

References:
Picture was downloaded from BBQabout.com.