Michelin and Zagat Restaurant Reviews: Which One Do You Value More?

By Linchi Kwok October 08, 2010
Earlier this year, we talked about what kind of online reviews about hotels and restaurants consumers may trust. Today, Bruce Palling at the Wall Street Journal discussed the differences between Zagat and Michelin reviews on restaurant ratings. My questions are: (1) Between Zagat and Michelin, which one do you value more than the other? (2) Which rating method do you trust the most?


For more than a century, Michelin is “the guide” for restaurants. Initiated in Europe, Michelin rates restaurants based on the feedback from anonymous inspectors and publishes their review once a year. Its territory has expanded from Europe to U.S. and Far East. Recently, it started using social media tools like Facebook and Twitter to promote Michelin and the ratings. 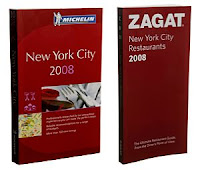 Zagat, on the other hand, is a relatively new guide for restaurant ratings. Zagat solely relies on reader surveys. North America is the biggest market for Zagat, followed by Europe and Asia. Zagat updates its online review more frequently as compared to Michelin’s annual printed review. A recent trend identified by Zagat is that it earned more revenues from iPhone or iPad apps than those from other channels.
To me, both ratings can be trustworthy and very useful. Michelin uses “experts” or “inspectors” to evaluate a restaurant. These “experts” can provide in-depth descriptions of their restaurant experience and explain why a star is given or taken off. Zagat asks readers to rate their restaurant experience in a survey. If the scale is valid and reliable, a consumer can easily predict his/her experience of a restaurant based on other readers’ ratings. Honestly, I cannot see how one method is absolutely superior to the other. I prefer to see a rating system that values both inspectors’ and readers’ feedback because I believe a mixed methods approach will allow consumers to see a more complete picture as compared to a single method. What do you think?